This is the third in our series of ‘case study’ interviews with Jon Pritchard customers who have recently had a loft conversion completed in their Bristol home. This time we talked to Corrina, whose semi-detached turn-of-the-century home in Bristol now boasts an calm top floor living room and extra shower room.

The family have lived in their house for fifteen years and it’s a much loved home where their children, aged 11 and 13, are growing up.

What were your reasons for wanting to convert your loft?”

“I think looking into the future we thought it would be useful, with the children getting older, to have an additional living space.”

Corrina talked about having more room for the children to spread out as they get older and want to hang out at home with friends. I asked her who gets loft conversion luxury, and who the downstairs living room.  She said,

“Because the loft is so nice we’re hoping it’s for us!” 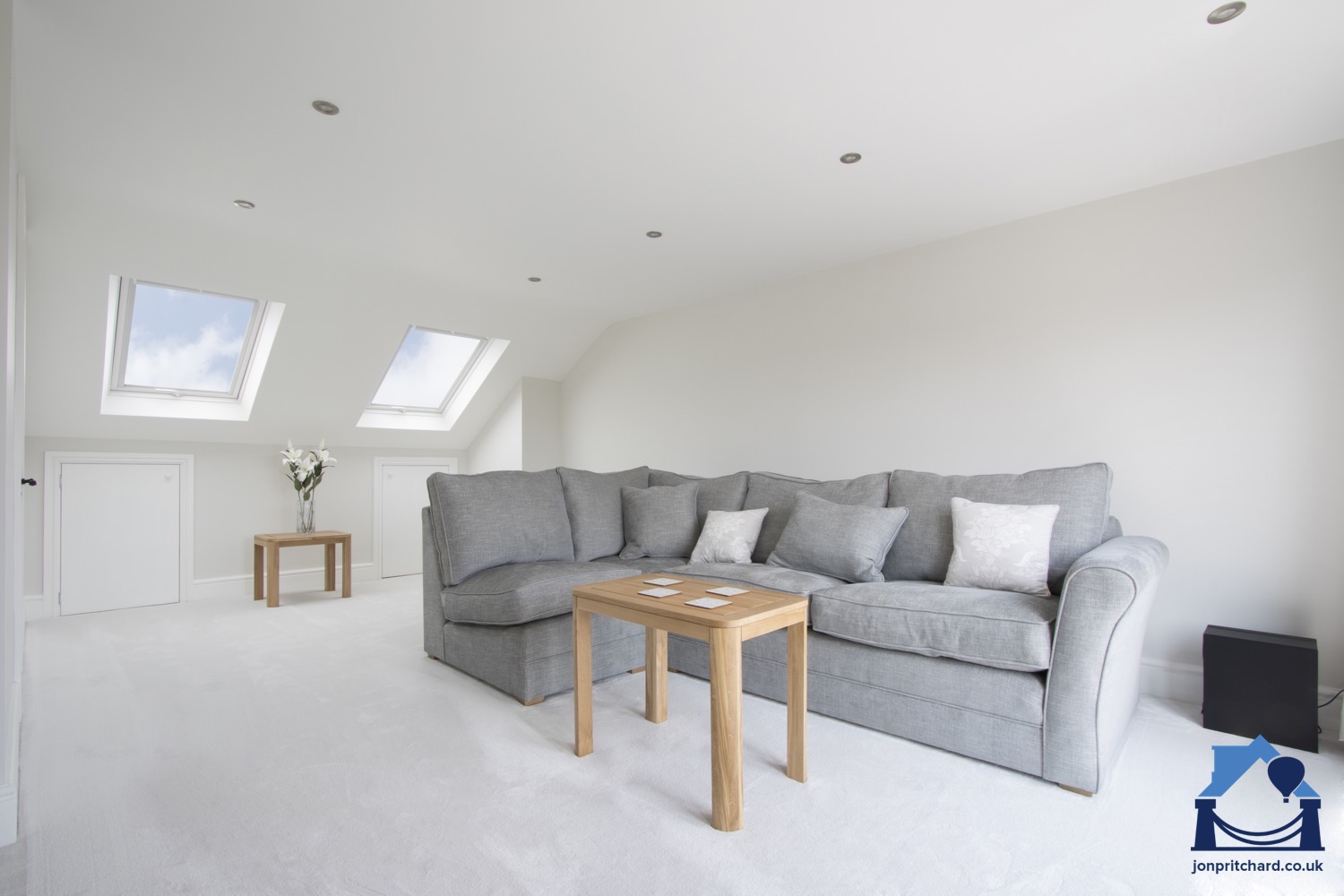 What rooms did you hope to achieve in your loft?

The family had always planned to make the loft a living room, and decided that it was a good opportunity to add a shower room as well. Prior to the loft conversion the property had one family bathroom and a ground floor cloakroom, which they added when the children were small.

Why did you choose Jon Pritchard?

“I was doing a search of local loft conversion providers and someone that I knew through work popped up on my computer as now working for Jon Pritchard – someone I respected as a man of integrity, so that made me contact them.”

“we felt we could definitely trust Jon Pritchard”

What did Jon Pritchard loft conversions have over their competition that made you choose them?

Corrina explained how another lofts company they got in to quote never got back in touch after the initial visit! However, with Jon Pritchard, she says,

“I got the impression they were very professional right from the start. We weren’t looking for the cheapest, but for someone we could trust. That’s more important. And we felt we could definitely trust Jon Pritchard.”

Did your ideas for your loft conversion change at all after engaging Jon Pritchard? If so, why and how?

“They evolved. The idea to have the double doors evolved and we’re really pleased with them.”

Corrina says that certain things about layout changed a little during the design process, but as they were clear from the start about what they wanted as far as rooms went, the basic idea for the loft conversion stayed the same.

“we always felt we knew what was going on” 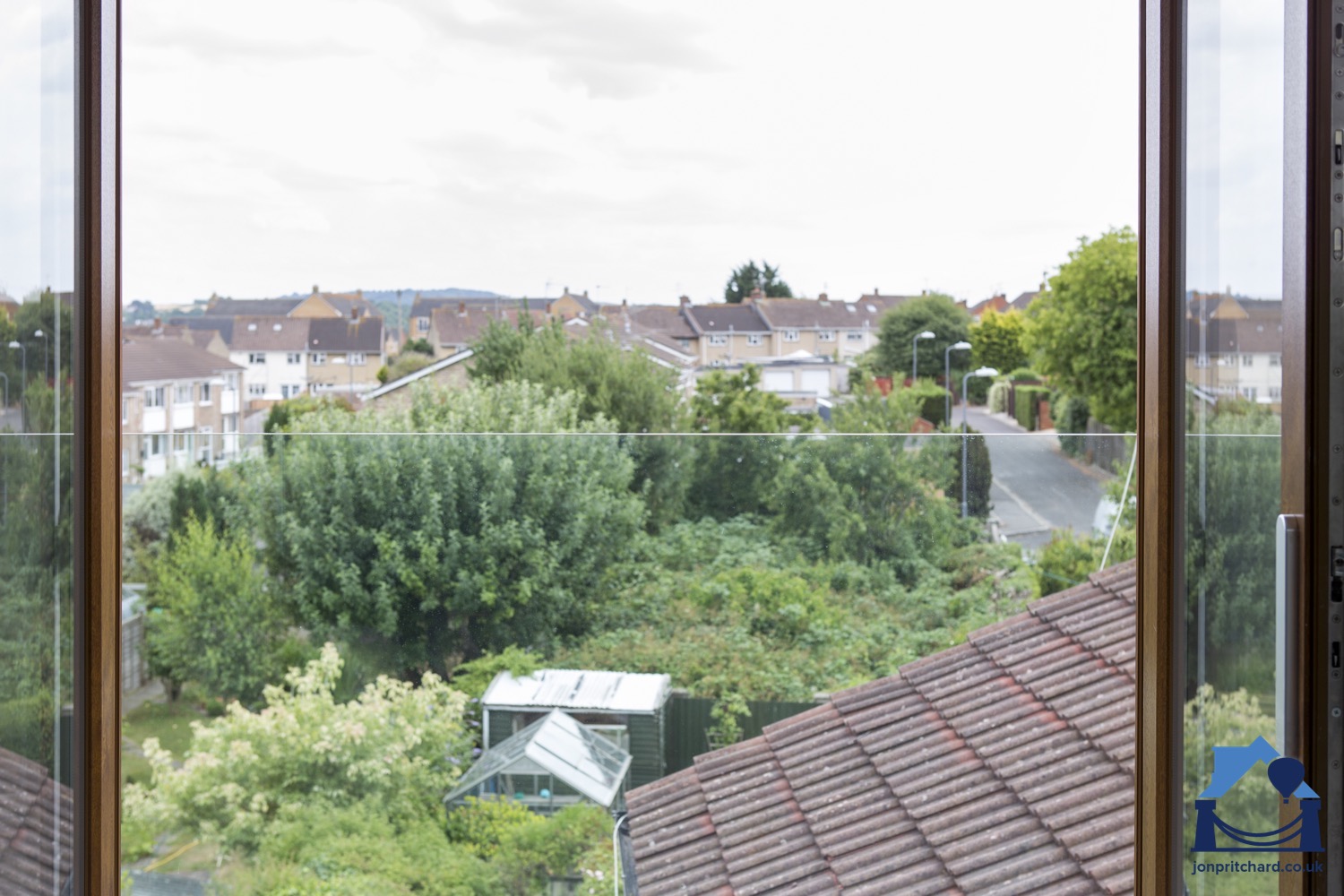 Double doors give views over the garden and neighbourhood, as well as letting in more light than regular windows.

“I think in the end it seemed to come around quickly as we had a few party wall issues.”

Did you feel you got good support to resolve those?

“Definitely, I really did. It got to a point that I felt it wouldn’t happen and Jon got involved and helped.”

Fortunately the issues weren’t acrimonious – the neighbours had some technical concerns that Corrina and Ian were not unable to deal with on their own. Jon Pritchard’s party wall specialist partner came to the rescue and helped resolve it as swiftly as possible.

You had the whole roof replaced as part of the project, was that always in the plan?

“Yes. The shape needed to change because of the loft conversion, and we’ve had a few problems with leaks in the roof that I wanted sorted.”

“The staff were all really professional, I was really impressed”

Have you moved into the loft? If so – how has it changed your lifestyle?

“We are using it – because it’s so nice I’m not allowing any food or drink up there at the moment! It’s mainly a television room and calm upstairs space.”

They used Jon Pritchard’s partner decorator to finish the loft.  Although Corrina is handy, she was quite happy to let a decorator deal with the high ceilings!

Sort out the party wall as soon as possible!

Do you think the loft conversion was a worthwhile project?

“I think it is a good investment in your property moving forward, it’s so expensive to move house… and your space needs change as your family changes…” 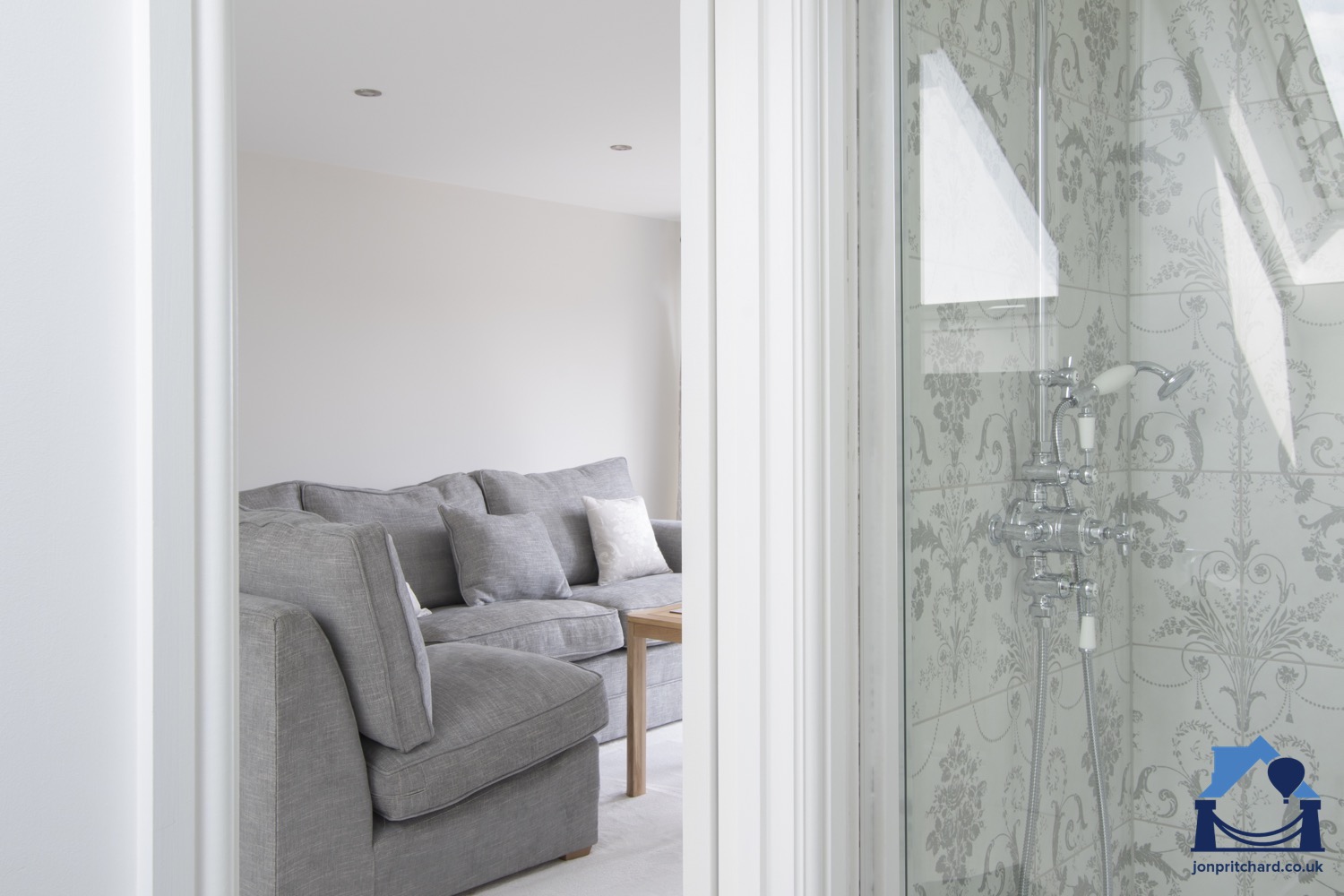 “The staff were all really professional, I was really impressed – especially for such young men, they were very respectful and really nice, They took responsibility and pulled things together on the ground, which was nice to see. We were really happy with the service and always felt like we knew what was going on.”

“Yes, we used it quite bit. It definitely helped – when there were changes is was useful to keep tabs on cost implications.”

One last question – apparently the new sofa you bought for the top floor was too big – but I hear it’s now safely installed?

“Yes, unfortunately we couldn’t get the sofa up the stairs, but found a solution by using scaffolding to get the sofa in through the external double doors in the loft. Even though the job was completed by this stage, I contacted Jon Pritchard to ask for his advice and he helped us organise the scaffolding and sent two of his employees to remove and reinstall the Juliet balcony on the day of the delivery. Great aftercare service!”

To engage Bristol loft conversions specialists who will go the extra mile,

get in touch today for a free initial quote.