Jon Pritchard has managed to carry on working throughout lockdowns, as we mentioned in our last customer interview.

Unfortunately our photographer wasn’t able to carry on with interior photo shoots. But she’s back!  Read on to see photos of a small terraced loft conversion we completed in late 2020, and hear from the owner about their loft conversion experience with Jon Pritchard.

What were your reasons for wanting to convert your loft?

“We wanted more space . We’d had it in the back of our minds since we moved in about five years ago. Now we have a child so…”

Did you think that the size would be an issue?

“It hadn’t crossed our minds until we got somebody up there. We weren’t unduly concerned as our neighbours have an attic. I think more of our neighbours will be having their lofts converted now – having seen ours!”

What did you hope to achieve with your loft conversion?

“Some adult space!   We have one daughter and just felt like we needed some kid-free space. We wanted a bedroom and bathroom for us.” 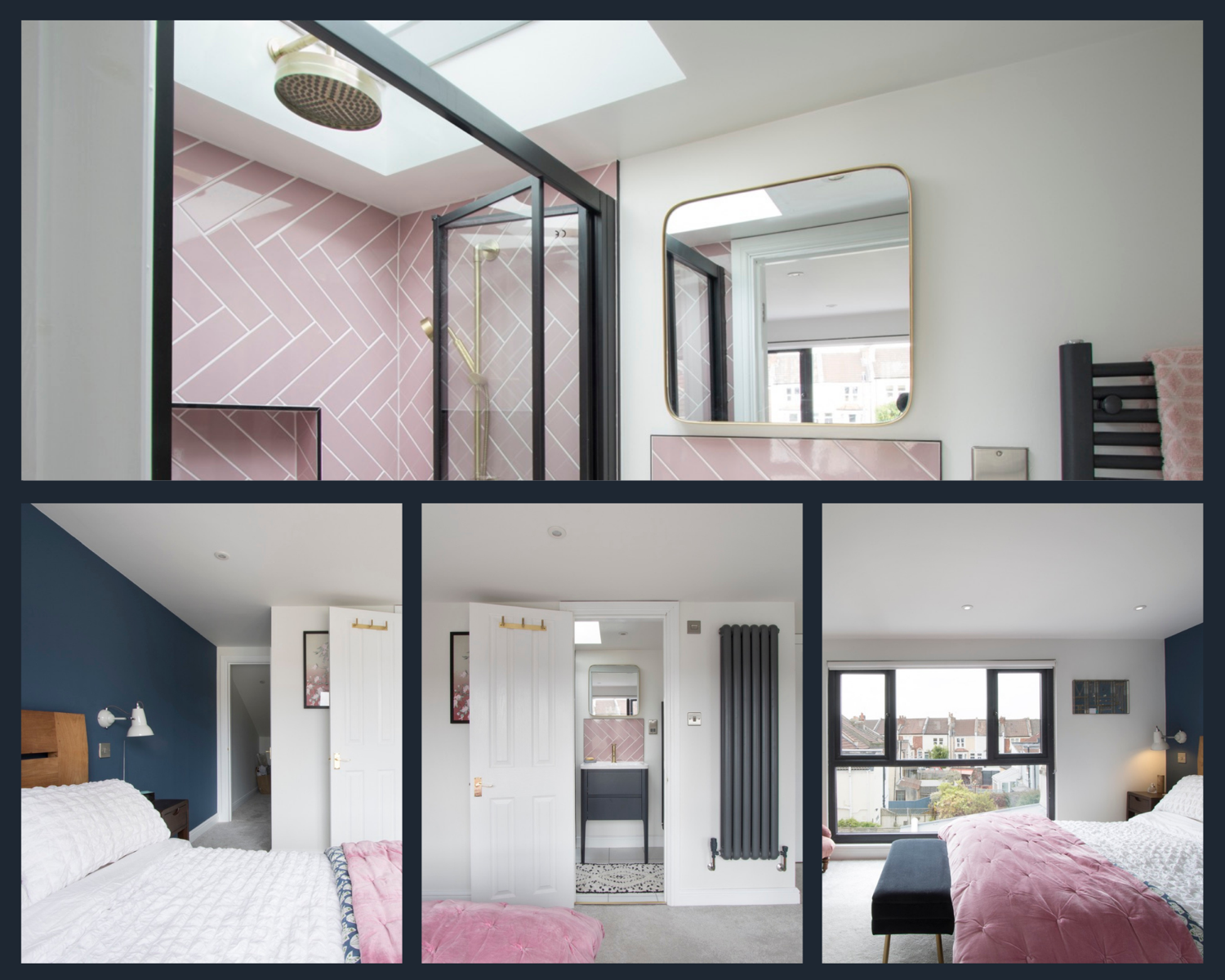 Why did you choose Jon Pritchard?

“We had seen their name around – especially in south Bristol. We had some friends who used them in 2019 who were really pleased and couldn’t say enough good things about them.”

The couple got a few other quotes, but chose Jon Pritchard above the other options:

“Partly because of Jon, who was straight and realistic about what we could and possibly couldn’t do. We talked about different things – whether we should do an L-shaped loft conversion… But Jon was good at reigning us in and getting us to think about whether this was our forever house or not, and what made sense from a budget point of view.”

This willingness to discuss what was right for them, not push them to have what might make the most profit really struck Chris. Compared to the other companies they spoke to, Chris says he felt that,

Did your ideas for your loft conversion change at all after engaging Jon Pritchard? If so, why?

“I think one thing I hadn’t anticipated, which was quite good, was it was reasonably fluid… things like the size of the ensuite, because it’s just interior walls, cupboard spaces etc. So we never really felt like we would go up one day and think ‘oh, this isn’t what we were expecting’.” 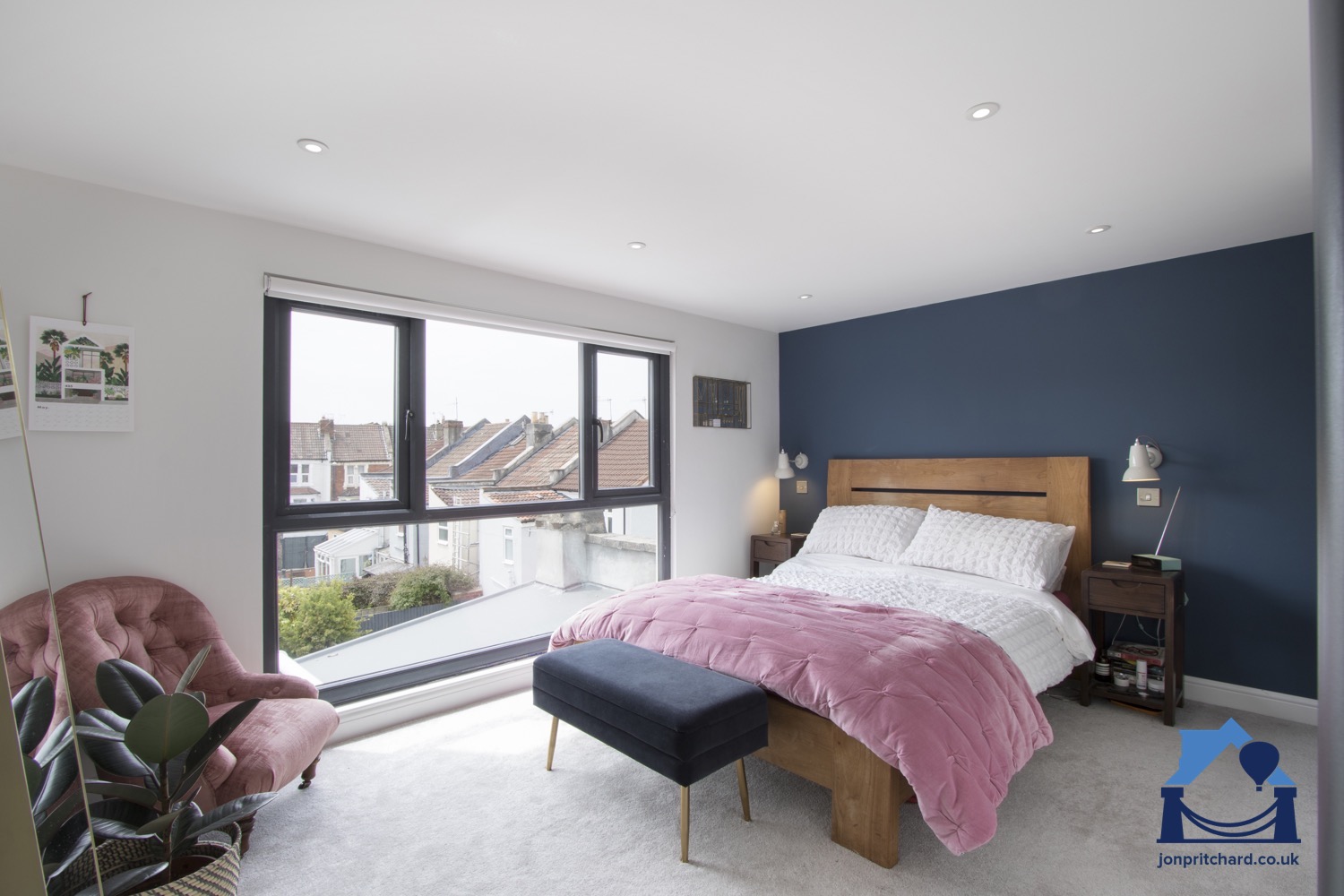 “Well, that was unique for 2020 I think. We first made contact around when everything was changing… must have been around March, we weren’t in lockdown then but everyone was being told to work at home if possible.

Jon Pritchard suggested October might be possible for our loft conversion. I think some people might have cancelled so our scaffolding went up in early July. We did think ‘are we ready?’ – to have things going on in the house all summer. But it was fine.”

“They were really good. I’m always a bit unsure when we get building work done – how much they want to see of us and us of them etc! They were incredibly courteous and respectful.  Our two main labourers onsite every day were fantastic. They would stay and chat as much or as little as we wanted, maintaining social distancing etc.

We were working from home throughout. I was literally in the room under the work. Given I was four foot from a building site, it wasn’t that intrusive. That really is down to Jon Pritchard’s team – the guys on site every day.” 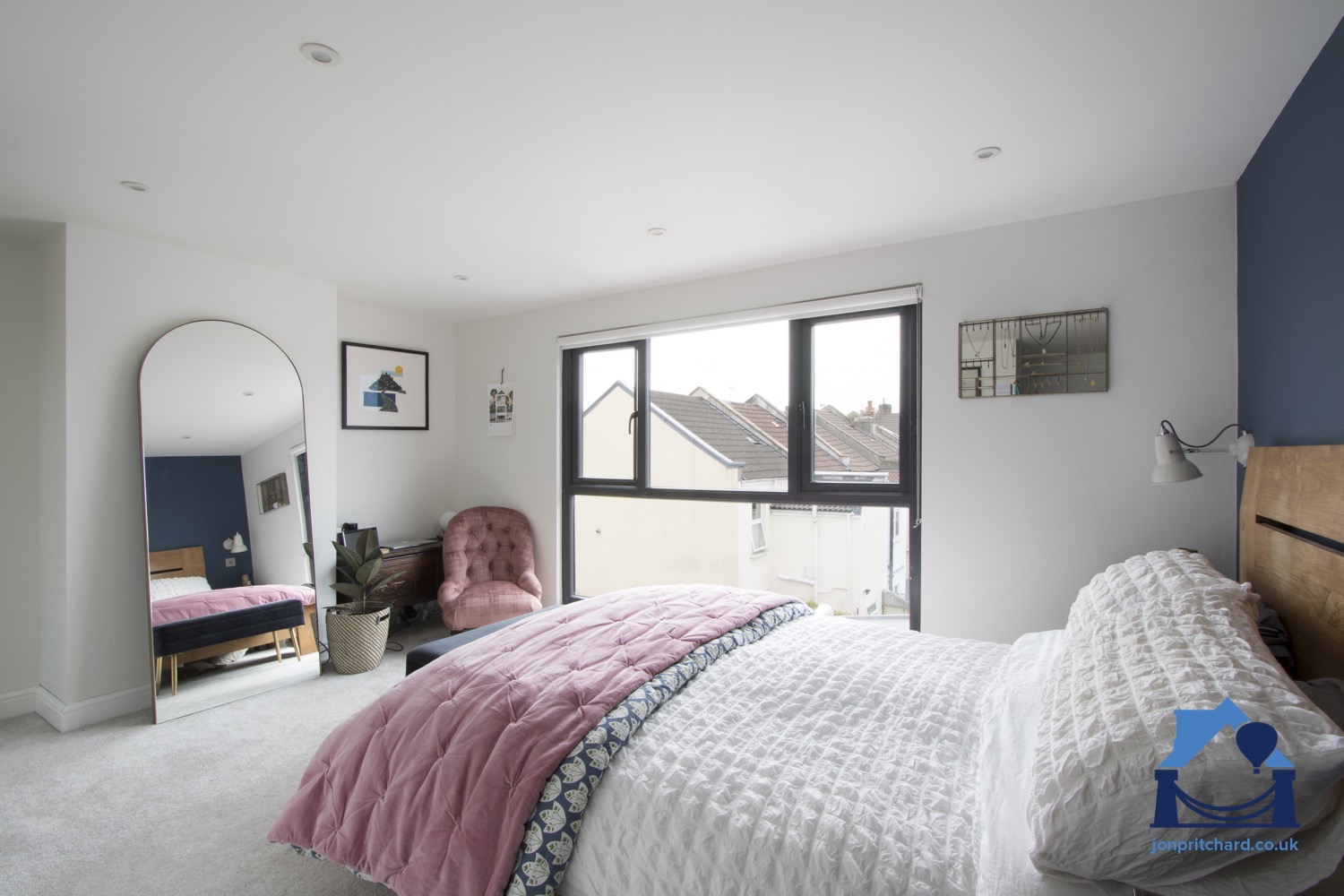 What else did the build team do that impressed you?

“Just being considerate and courteous – maybe trying to be a bit more quiet when childcare was closed and our daughter needed her nap. Keeping out of the way when needed.”

Was the delivery timescale impacted?

“There were no significant delays to materials. There was always plenty going on.”

Chris says that having an old Victorian house means he never expects home improvement projects to go completely to plan,

” you expect things to be a bit complicated here and there. In the end it took about sixteen weeks.” 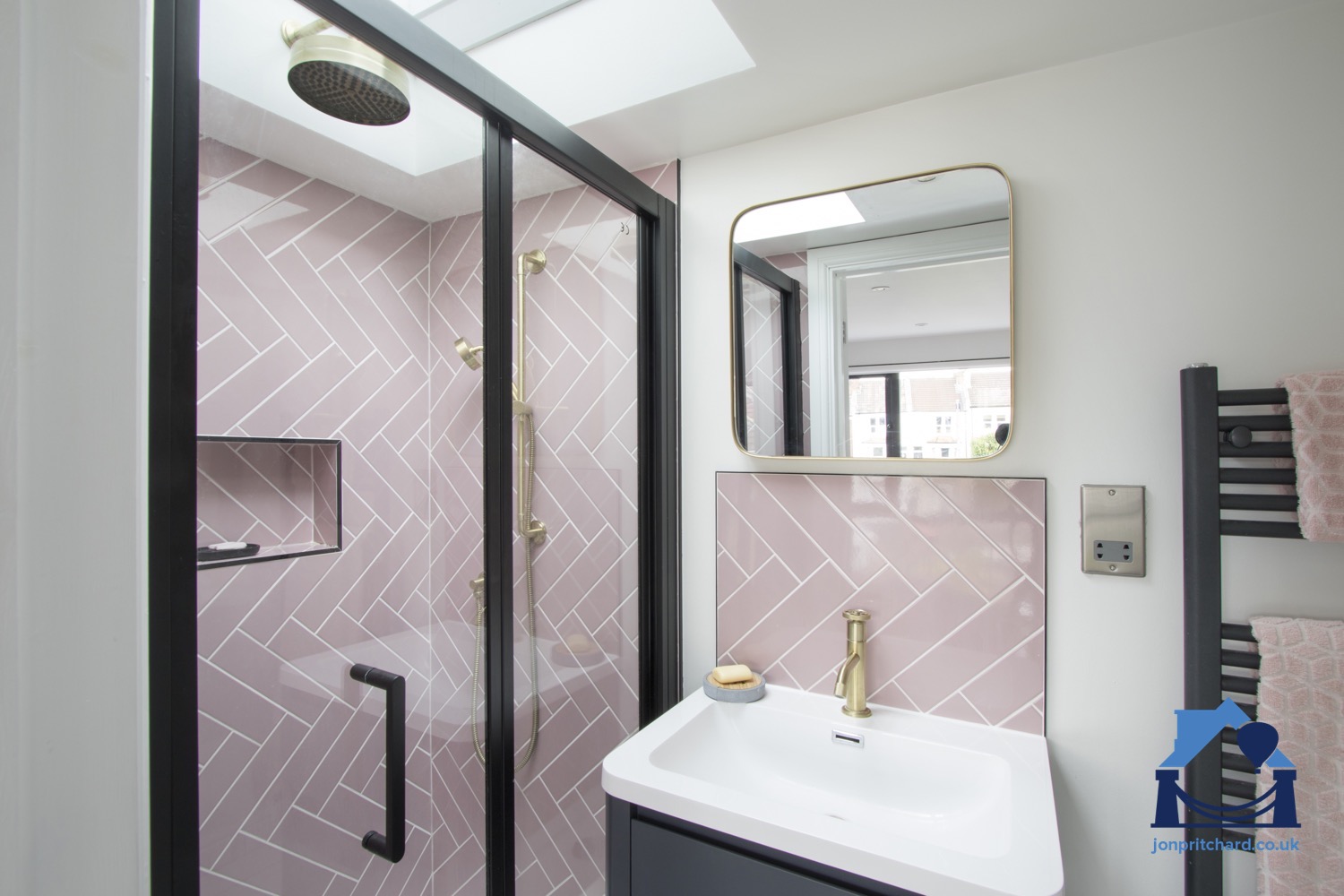 Did you have any issues, and if so how did Jon Pritchard support you and deal with them?

“At one point there was some water coming in during rain. But every time I put a message on the internet portal or via the app, even on the weekend once,  Jon’s guys came and patched it so it was good until they could come and do a proper fix. That really gave us confidence. They were really responsive to any issues we had.”

The shower in the ensuite is a particular item of note in the terraced loft conversion. Sloping ceilings are a given in loft conversions, and positioning a shower, with shower tray underneath, in a place where it’s still easy to stand under it, can be tricky in smaller homes.  But Jon Pritchard’s team were ready for the challenge.

“Because of our available head height we were really restricted, we could basically have what we needed in the loft and no more. For most rooms that’s fine, but when we started to get into the nitty gritty of choosing what goes where in the ensuite, I realised standing under the shower might be an issue.

Our project manager came up with a really good idea… We always planned to have a Velux or light tunnel to get light into the bathroom – and he had an idea he was gagging to use! It’s brilliant. We have no more height in the bathroom than anywhere else… we were so impressed with Jon Pritchards’ guys’ willingness to work with us to get us where we wanted to be.

Chris thinks back to the other companies they considered for their loft conversion.

“…they would have done a good job, but it would have been “here are your options take it or leave it.”   Chris says no other company they spoke to had the passion and creativity that Jon Pritchard showed in solving their loft ensuite shower issue.

“They never would have… and I feel that the feature we have is really special.” 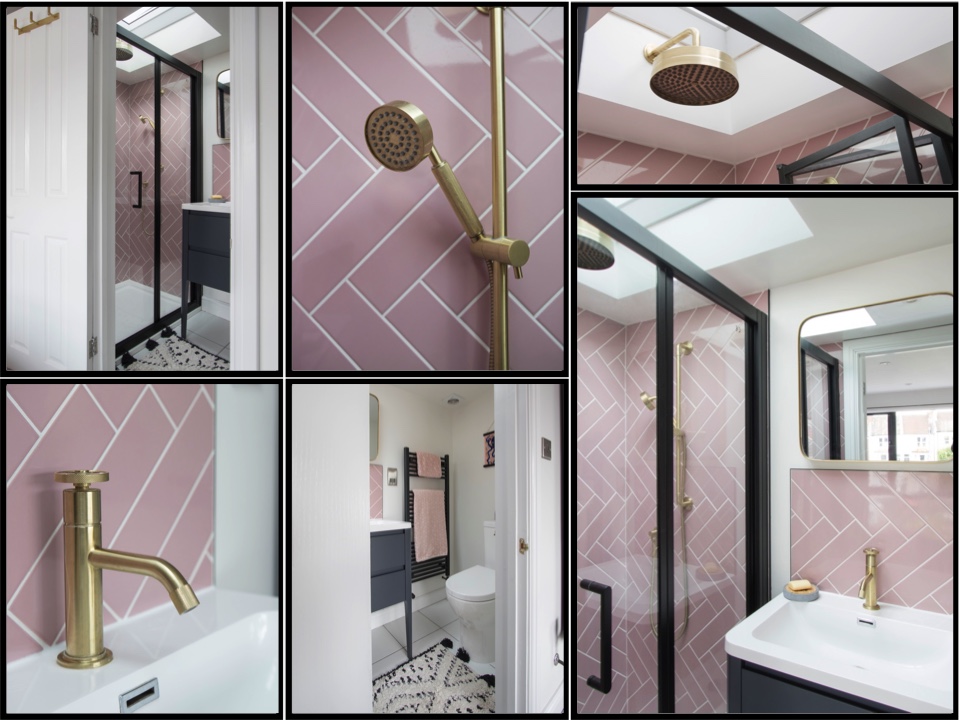 “Don’t rush it. This has been a five-year thing for us and I’m pleased we waited and didn’t just jump in. Having been in the house for five years we have a much better idea of how we use the house… and five years ago our attic was full of ’stuff’!”

There’s a limit to what you can do in a loft – however amazing your builders are! Chris says that having a flexible attitude to your plans is important. And,

“Budget for extras – we knew we would have to, and I think we got it spot on.”

The bathroom was one area where the couple decided they wanted to spend a bit more than the original allowance in their quote.  They were very pleased with the quality of the bathroomware supplied by Jon Pritchard too,

“It is really good gear, really well made, they get a decent discount on it and it’s really worth using. People might think it’s going to be cheap, but it’s not.”

What are your plans for your old first floor bedroom?

“It’s a a spare-room-come-office. That means our daughter won’t get turfed out of her room any more when we have guests!”

Do you think the loft conversion was a worthwhile project?

“Yes. Definitely. Ask me again in five years or when we try to sell the house!” 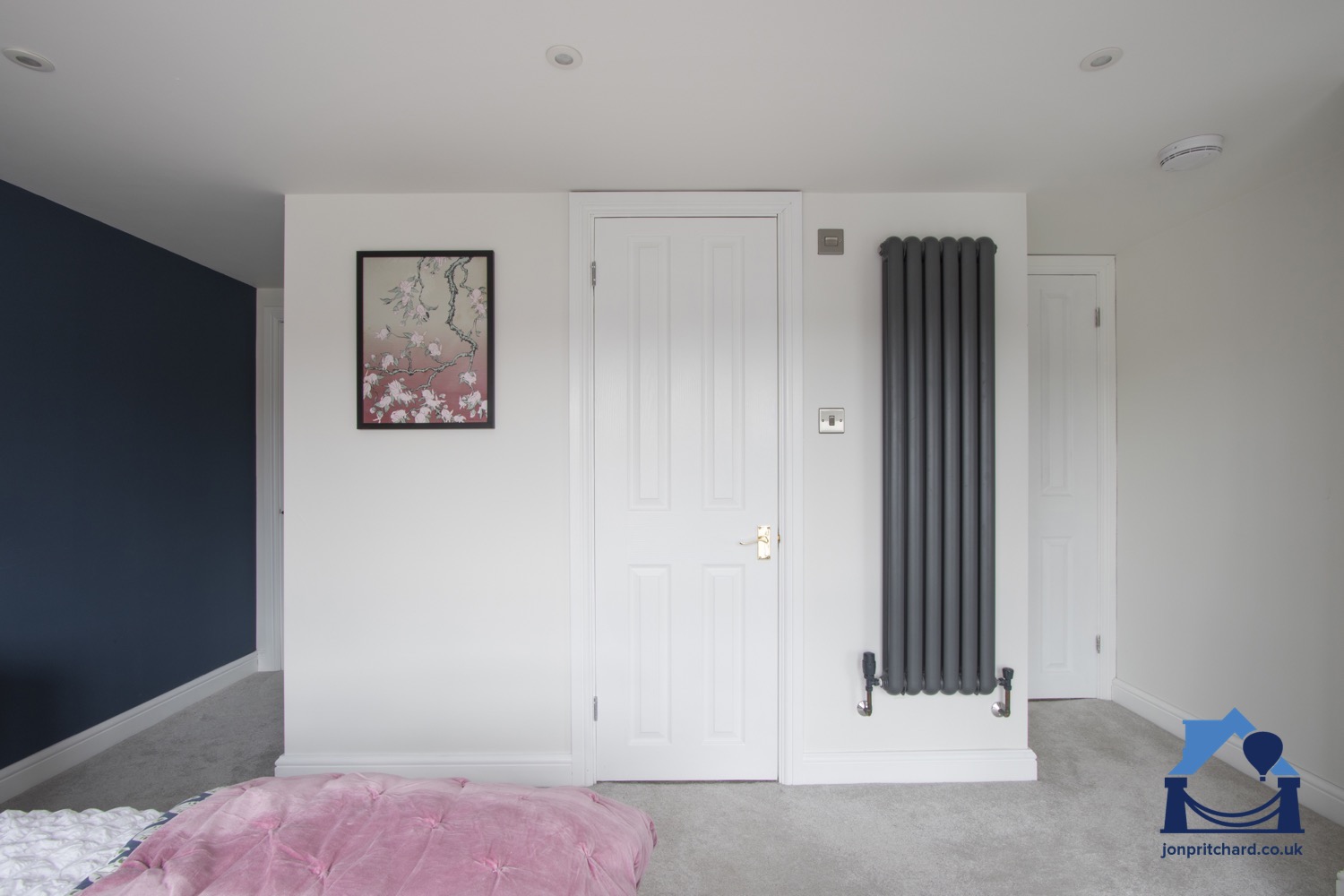 “I just really did find them incredibly good to work with. He have lots of builders in our area at the moment, I think even when it comes to stuff like thinking about parking, where the skip goes. Jon Pritchard seem to be much more considerate than others. I’ve seen scaffolding trucks drive down our road and put gouges in cars and not care. With Jon Pritchard it’s like working with people rather than just folks who come and chuck a bunch of building materials around.”

“Yes. A lot of the communication was done on there, approving extra spend etc. We found it really useful. 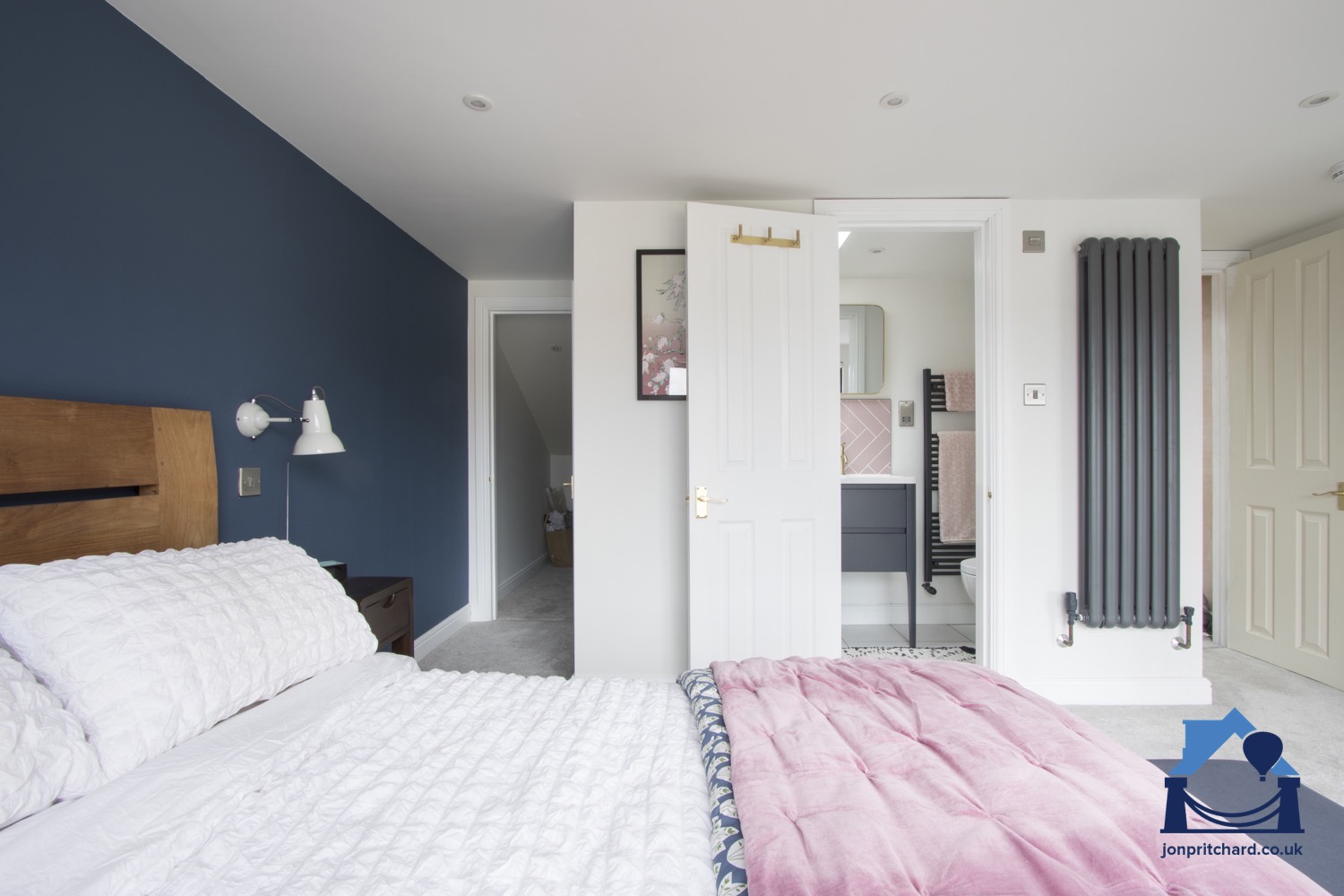 There are more customer interviews here on our blog, as well as all sorts of helpful information for you before, during and after your loft conversion project. You might like to read this post all about the secure personal project website and app you can use to keep in touch with progress, and your team, during your loft conversion.